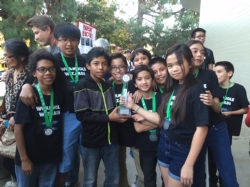 The judges were particularly impressed by the scientific research conducted by the CNCA students. The theme for this year’s FLL competition was “responding to the impact of human produced trash on our environment.” Our middle school team investigated ideas to address the theme. They discovered that on September 30, 2015, Stanford University published research that demonstrated microbes inside the gut of mealworms could break down Styrofoam into organic material. Our students decided to conduct their own research to build upon this finding. They tested whether or not other forms of plastic might also function as a food source for mealworms. The preliminary results seem to indicate that mealworms can indeed derive sustenance from various forms of plastics sufficient to support mealworms through various stages of the animal’s lifecycle from larva, to pupa, and eventually to beetles. In fact, several of the plastics tested proved superior in this regard when tested against the control variable, which is wheat bran (the common food provided commercially to mealworms).

The growth curve for mastering the challenges of this robotic competition is steep for students and coaches alike. This is the second year of the robotics program at CNCA Kayne Siart. Sixth grade teacher, Nathaniel Shultice, launched the effort last year with one team of eight students – an all male group. This fall Mr. Shultice implemented a strategy to engage female middle school students in the robotics program. In its second year the program has grown to include twenty students, attracting participants from all three middle school grades. Twenty-five percent of the CNCA Lego Robotics participants this year are female, including one of the two team-captains.

The achievements of CNCA Kayne Siart’s robotics teams in the FLL Qualifying Tournament is testimony to the dedication of all the students and coaches alike. Everyone is invited to join the parents, fellow students, teachers and staff at the FLL Regional Finals on Sunday, December 13th at La Cañada High School from 9 a.m. to 4 p.m. to cheer on the “Wormhole Wizards” as they meet the next level of Lego robotics competition.
See some photos of Lego Robotics HERE
http://kaynesiart.caminonuevo.org/apps/album/index.jsp?dir=36624&backLink=&backTitle=